"Healing is the road & process to lasting peace." Elana Stanger 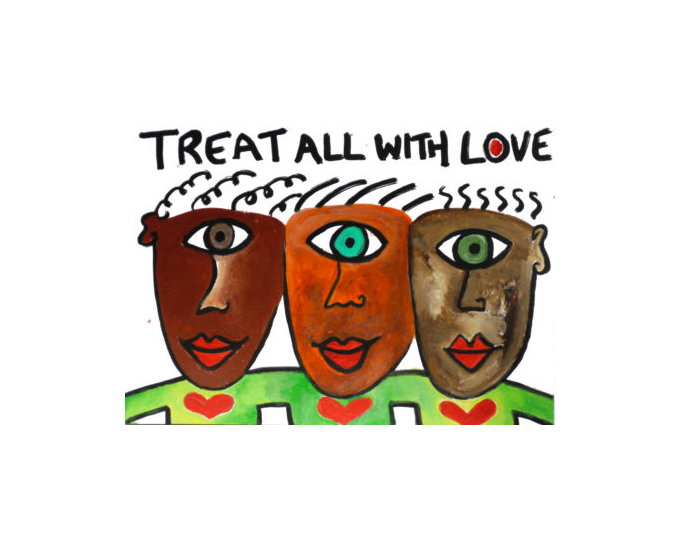 Greetings to all and Shalom. Salaam. Om Shanti. Paz. Peace to all of you, my new friends and old ones also…

As I awoke this morning with our Jewnity and also Unity Theater™ in mind, a story came to the forefront of my memory. I recalled being a student in graduate school at George Mason University’s Carter School for Peace and Conflict Resolution where I researched and analyzed so-called intractable global conflicts, aiming to solve and resolve them. My alma matter is still considered the top school to attend for this subject, and it was when I went there in 1997.

I attended The Carter School for Peace and Conflict Resolution with a primary focus on healing racism in the United States. This passionate concern led me to do research around making restitution to Black People for their unjust and reprehensible enslavement. I wanted to develop a vehicle through which we could take action to heal this seemingly insurmountable conflict. The development of an original ritual theatre performance for intergroup healing, applicable to all human beings and all conflicts between and among humans, which I call Unity Theater™, was only just beginning at that point, just a gleam in my eye. It would be a theatrical attunement experience to resolve interracial and intercultural conflict.

I read the books of experts and those with exemplary knowledge and mastery in mediation. I internalized techniques and tools for the resolution of conflict. I wrote papers in which I laid out creative resolution processes. I reflected on what made people consider some conflicts to be intractable.

I also defined my work more as conflict transformation than conflict management, a not-so-subtle differentiation signifying the difference between leaving well enough alone and manifesting new visions of possibility for all concerned! It is the difference between putting band-aids on the elephants in the room versus making real and lasting social change. We can have change that is inclusive, just and equitable through a collective process of eliciting solutions. We can weave together all voices from cacophonous discrepancy into beauty, order and harmony.

Simultaneously, while attending graduate school at George Mason University, I became involved with the Re-Evaluation Counseling movement, led by Harvey Jackins. I learned that RC theory could help human beings uncover psychological and emotional patterns lodged in the brain’s neural and sensory pathways. I could help eliminate those that could be destructive to self and others. This could be done through a peer counseling process involving a specific type of emotive ventilation or discharge involving laughter, shaking, tears, non-repetitive speaking, etc. This could help everyone’s feelings of anger, sadness, mistrust, loss, hopelessness, despair and rage be addressed and replaced with hope, joy, love, harmony and an awareness of the present moment in which all of these more positive feelings exist naturally. In a sense, it could take one back to a time in which war never was, in which trauma never was, in which the brain was no longer injured. Of course, we do not mean that it would be wise to forget or deny where we have come from, however, it does signify that we can heal into a state of brain-peace. And where there can be inward peace, there can also be outward peace on a group or collective scale. In dyads with caring others, as well as in larger groups for the purpose of providing loving and empathic attention, pathological patterns could be eliminated and replaced with the capacity for joy, awareness, presence, and a recovery of clear, rational thinking.

I graduated in 1999 from The Carter School for Peace and Conflict Resolution with a strong belief and hope, which I still carry, that I am able to resolve all kinds of so-called intractable conflicts with a clear knowledge of Re-Evaluation Counseling theories as well as additional therapeutic and creative modalities. These could be helpful in working with human beings from diverse cultures and viewpoints, as well as those who are afflicted with certain pathologies I believe could be addressed with accurate therapeutic methods. Even personality disorders such as narcissism are able to be addressed and resolved. Culture change could become real, from a culture of war to a culture of peace, etc. I made up my mind to become a licensed psychotherapist and thus to secure the credential I would need for the peacebuilding work ahead of me.

In 2009 I went to The Hunter College School of Social Work in New York City. I graduated from there, obtained supervisory support, and became a Licensed Clinical Social Worker and Psychotherapist. As my desire to employ my newfound, additional knowledge, skills, and abilities to resolve conflict grew, I continued to move in the direction of healing the wounds that make good and innocent human beings lash out at one another. I developed my ideas further, as well as Unity Theater™, and continued to apply my learning in the world.

What I now know is that when people are at war on an ongoing basis, their brains change, and while it may be difficult to change them back to a normal, peaceful and non-anxious state of existence, it is not impossible. Brains are flexible. They have a quality of plasticity that allows them to be changeable. This is how the healing process works. And if those brains that have suffered through war for hundreds and perhaps thousands of years can be changed because they are inherently flexible, peace is possible.

I know that intractable conflict and war are not rational and could be cleared up with enough loving attention, acknowledgement of wrongdoing, and awareness of the reality of the present moment in all of its benignity. This does not mean that social oppression is not real. It is. Not only is war irrational. It is also irrational for one person or group to oppress another person or group on an ongoing, daily basis. This is also wrongdoing. It must be addressed as such. It is a difficult but not intractable problem that stems from internalized mistrust and deeply held beliefs around the demonization of the other person or group.

I want to help us all understand war from this perspective as well as employ an understanding of the groupthink and peer pressure mentalities which are often part and parcel of belonging to, and acceptance in, our various cultural identity groups. Despite social pressure, we must continue to swim against the tide of racism and social oppression and think for ourselves as individuals. For ourselves, our families, our communities, and for the sake of Earth herself, we must embrace peace. We must be vocal about this. And we must address and undo the ways in which everyone has internalized the unwanted prejudice that fuels social conflict.

In the psychotherapeutic theory known as Cognitive Behavioral Therapy, we discuss the significance of our thoughts, feelings and behaviors. I believe that systems and thus institutions are made up of individuals whose thoughts, feelings and behaviors are all intertwined. In the case of the individual, I am simply saying that where a human being harbors culturally prejudicial thoughts and feelings, their behaviors are likely to be prejudicial also. And where a human being has loving thoughts and feelings for another, their behaviors toward others are more likely to be loving. And I believe that because individuals can change, I believe systems and institutions can also, such as racism, classism, and all social oppression. This knowledge has applications for everything from workplace politics to more humane policing strategies, and government decision-making that is non-partisan rather than bi-partisan. I think our lives and the world, the inner planes and the outer ones, are actually more flexible than we think!

All we need are a sufficient number of trained professionals, well-versed in my techniques for peacebuilding, to address the number of people who have suffered the traumas of war and who have a tremendous need for healers and healing. We can decrease the number of healers that we require by applying group healing processes, such as Unity Theater™, which involves group recalibration for peace, love, harmony and unity through creative methodologies that put wounded people back in touch with their own creative energy, life force, and resources for healing themselves.

At this time, and for the next 20 years or so, I would like to engage us in a Global Dialogue On What It Means To Be Hue♥man through Jewnity and Unity Theater™, and I would like to help humanity employ therapeutic ideas and methods to be able to resolve some of the conflicts we have erroneously labelled intractable. I would like to do this as if our lives depended on it… because they do.